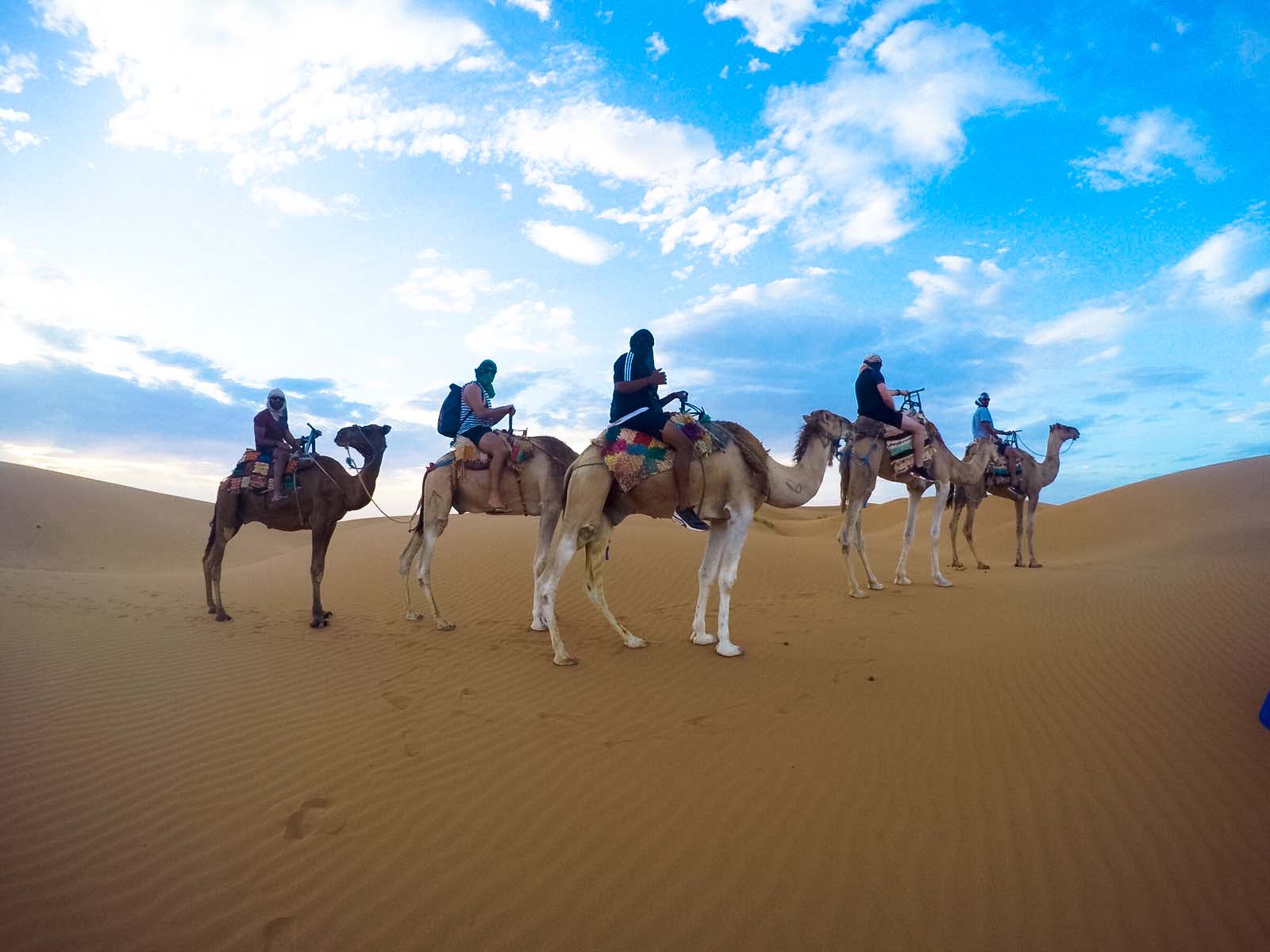 Meet and greet at the Casablanca airport, then start discovering Morocco’s largest city and economic capital. On the way to the city center, then we will leave Casablanca along the coast line to Rabat. dinner and overnight

After breakfast departure to Tangiers along the road you will pass by Kénitra centre interchange, before continuing north towards the Kénitra, then follows the coast past the fishing village of Moulay Bouselham. 30 km north of there is the town of Larache an important harbour town in the region Tanger-Tétouan in northern Morocco., then Sidi El Yamani, connecting to the road to Tetouan. There is another town Asilah, is a fortified town on the northwest tip of the Atlantic coast of Morocco, before reaching Tangier. Its ramparts and gateworks remain fully intact with 40 km remaining to Tanger. Dinner and overnight.

Enjoy a full day guided tour of Tangier, Morocco’s main gate to Europe and the settling place of many artists from around the world. Tangier is an incredibly unique city with many landmarks worth seeing. Begin with a tour of the world-famous St. Andrew’s Church. Continue through the neighborhood of villas and mansions where we will see the Royal palace among the houses of many celebrities. Transfer to Cape Spartel, where the Mediterranean Sea meets the Atlantic Ocean. There, we will visit the Cave of Hercules, which dates back to the Neolistic era. Return to Tangier to resume your city tour. This will include the Dar El oued Makhazen Kasbah, the American Legation, the Mendoubia Gardens, and the Grand and Petit Socco, where we will watch some Andalusian musicians. Overnight in Tangier.

After breakfast departure to chefchaouer or (chaouen) a trip that will take about 3 hours, The roads wound around the valley edges as you travel along towards the Rif mountains. Stop in Tretuen for lunch , Tetouan is one of the two major ports of Morocco on the Mediterranean Sea. It lies a few miles south of the Strait of Gibraltar, and about 40 mi of Tangier, then continue to Chefchaouen. Afternoon visit of Chefcaouen. Dinner and overnight.

The drive from Chefchaouen to Moulay Idriss near Volubilus is about three hours. Once in the region, we’ll be able to explore the Roman Ruins and the sacred town of Moulay Idriss. A walk around the impressive Roman city site, then you will have some time to see where Morocco’s first Arab conquerors settled, in the small, sacred town of Moulay Idriss. Then off to Meknes where you can explore an afternoon some of this Imperial city’s sights and continue to Fes. Dinner and overnight.

After breakfast we take a full day city tour of Fes with a local guide, which will include Jamaa Al-Karaouine––the world’s first established university––and the Medersa Bouanania, not to mention the tanneries, clay workshops, artisan quarters, and souks of largest and oldest medina in Morocco. Overnight in Fes.

Transfer to Midelt passing through many Amazigh cities and villages, the first of which are Ifrane, nicknamed “Morocco’s Switzerland,” is a charming ski town populated by European-style chalets; and Azrou is widely known for its handcraft cooperative. Arrival to Midelt for dinner and overnight. for overnight. Midelt serves as the commercial center of a large agricultural hinterland. It is also one of Morocco’s principal cities for the mining of several minerals.

After breakfast, departure to Erfoud along the Ziz River, passing through a series of fortified villages before getting to Errachidia, in the south east of Morocco considered to be one of the most historically important regions of Morocco. Lunch at Errachidia then continue to Merzouga via Erfoud.

Take an optional sunrise camel ride along the golden sand dunes in Merzouga. Then return to Erfoud for breakfast before driving to Tinghir via Rissani and Tin- jdad. Tinghir is a gorgeous, 40km oasis, which boasts all above the Todra Gorge, a 300m wall, carved deep into the High Atlas Mountains, then transfer to Kelaat M’Gouna along the Dades Valley. Kelaat M’Gouna is a large village, which is famous for cultivating roses, so expect to find many fine, rose-infused products there. Transfer to Ouarzazate, also known as “Morocco’s Hol- lywood,” for dinner and overnight.

Begin city tour of Ouarzazate with the Taourir and Ti- foultout Kasbahs, which are considered to among the most beautiful kasbahs in Morocco. Next, visit the film studios where some of the most famous desert land- scapes were and are still being shot. Continue on to the spectacular fortress of Ait Ben Haddou, the iconic land- scape immortalized in such films as, Lawrence of Ara- bia, Gladiator, and Alexander. Leave Ait Ben Haddou, crossing the High Atlas Mountains via the magnificent Tiz In Tichka pass to Marrakech for overnight.

Take a full day guided city tour of Marrakech, be- ginning with the world-famous Jemaa el Fna Square, which houses an array of food, snake charmers, local musicians, and fortune-tellers. Next, visit the Koutoubia Minaret, Bahia Palace, and the Saadian Tombs, lunch at the hotel, afternoon tour of the medina . Dinner at a local restaurant and Overnight in the hotel.

We will head towards Essaouira for the rest of the day and for the overnight. Essaouira is an attractive city with a beautiful old Medina that never ceases to seduce its visitors. Its beautiful architecture, cultural treasures, curving sandy beaches, and stunning combination of ocean views. Essaouira is also very rich with artisan quarter and has a big fishing port.

After breakfast, transfer to Casablanca via Safi, Oualidia and El Jadida. Safi was under protectorate by the Portuguese Empire from 1488 to 1541, while the fortress built to protect the city, under Portuguese rule is still there today. Safi is the main fishing port for the country’s sardine industry, and also exports phosphates, textiles and ceramics. During the Second World War, Safi was one of the landing sites for Operation Torch. After Safi, stop at Oualidia for lunch before continuing through Eljadida to Casablanca for dinner and overnight.

After breakfast, we will transfer you to the Casablanca airport for your return flight.